You are here: about us » district convention » convention2022

Meeting for the first time as a district at Convention for 2 years our weekend gathering proved a real hit with 'SHOWTIME!' as our opening night theme.

Having been reliant on technology to stay in touch over the last 2 years it was a real pleasure over the weekend of 11 - 13th March to meet face to face with old friends from around the district for the 3rd District 105SC Convention.

Over 80 Lions with their partners gathered on the Friday evening at the Doubletree by Hilton Hotel, Swindon, many in fancy dress for the themed 'SHOWTIME!' Host Night. As the traditional convention ice breaker the evening celebrated musicals from West Side Story through to Mamma Mia with many laughs and catch up stories.

Convention Day started with the opening ceremony conducted by the Mayor of Swindon Councillor Garry Perkins including the traditional Flag Ceremony and act of remembrance to commemorate 11 Lions Clubs members we have lost to higher service in the last year. District Governor Brian Donovan welcomed over 80 attendees from across the District and our International guests International Director Lion Daniel Isenrich and his wife Biggi from München-Heinrich der Löwe Lions Club, Germany, together with Immediate Past International Director Geoff Leeder.

The nomination for the 2022-23 District Governor - Dave Ebsworth was made by the Lions Club of Reading and supported by Wimborne & Ferndown Lions. David Taylor from Gillingham, Mere & Shaftesbury Lions Club and Sandra Manktelow from Petersfield Lions Club were nominated for the position of 1st and 2nd Vice District Governor respectively. Each candidate addressed Convention to outline their ideas and how their experience will benefit the Lions Clubs into the future before the ballot boxes were opened for delegates to vote.

Three resolutions were detailed to Convention before the card vote. Details...

The Zone Chairman's reports were voted through en bloc Details...

Past International Director Geoff Leeder outlined the Lions Clubs International Foundation response to to the Ukraine Crisis detailing the grants given to Lions on the ground helping the refugees in the countries surrounding Ukraine, together with aid given by Lions Clubs throughout Europe. He then appealed to clubs throughout 105SC to contribute to this life saving campaign. 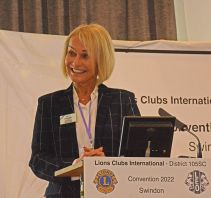 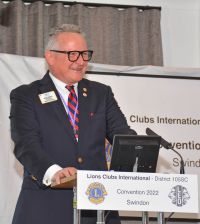 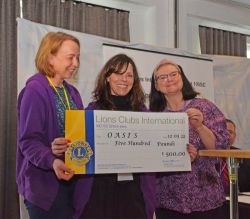 Kerry Fernandez and Joanna Hulbert detailed how OASIS which has been running since 1998 creates a supportive community for parents and carers who are looking after children and young adults with Autistic Spectrum Disorder and related conditions in Oxfordshire. Since July last year Lions Clubs have been collecting for and donating to the District Governor Partner's appeal fund for OASIS. As a result Lion Lesley presented a cheque for £500 for their ongoing work. 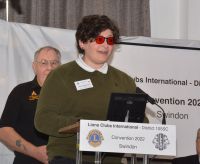 Cloe has been helping the less fortunate as part of the Combined Victoria College and Jersey College for Girls Cadet Form where she is a Cadet Corporal. In her role of Corporal, she teaches first aid to the cadets every week, helping them work towards their own Grand Prior Award. Also as a member of St John Ambulance, she has been involved in public duties providing first aid care to events such as the Barclay’s Jersey Boat Show. For further details about Cloe's work on Jersey Click here.

Short presentations from Fleet, Hook & Odiham and Basingstoke Lions Clubs were given before Convention was introduced to Liz Jackson MBE who is an ambassador for The Snowdrop Foundation, a charity focussed on supporting initiatives that serve the most vulnerable people in society. Liz is an inspirational figure with an extraordinary story, as many would have discovered when she was featured in Channel 4’s ‘Secret Millionaire’. 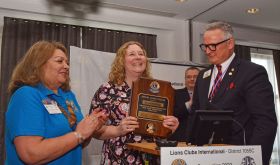 Honoured by Her Majesty the Queen, Liz was awarded an MBE in 2007 for services to business, and in 2012 she was bestowed with an honorary doctorate by Staffordshire University for her business achievements. Suffering from a steadily worsening eye condition for most of her life, Liz lost her sight completely at the age of 26. She worked through this with with her overriding ambition to become CEO of her company. That achieved she also  became an accomplished author, having published her book StartUp! which provides invaluable help and advice to entrepreneurs everywhere.

After her talk and following a long and heartfelt standing ovation the proceedings were paused for a short presentation ceremony. During the vote of thanks to Liz a citation was read detailing Liz's remarkable life, her business achievements and charitable work. International Director Daniel Isenrich  then awarded Liz a Melvin Jones Fellowship, on behalf of Loddon Valley Lions Club with the assistance of the President of Loddon Valley Lions, Vanessa Tolson Goddard. The Melvin Jones Fellowship is the highest award any Club can bestow upon an individual.

District trophies and International Awards were presented before thanks being given to the Host Committee and end of Convention Flag transfer. District Governor Brian Donovan gave the closing address before the closing ceremony concluded with a rousing rendition of 'We'll Meet Again'.

The Saturday Night Banquet and Ball was attended by 84 Lions and their Partners.

The informal Sunday Morning to discuss membership initiatives was led by Past District Governor Jarvis MacDonald who heads up the Global Membership Team.