You are here: news » in memoriam

It is with great sadness that I have to tell you all that Hilary died at home this morning.

She and Dave had contracted Covid while on a cruise on the Queen Mary and this may have been a contributory cause.

Dave was a Past President and member of our club until they moved to Devon, but they were regulars at our Charter each year and longstanding members will I am sure be just has upset as I am.

Ted has passed on the best wishes of all the club to Dave who has his son Rob living nearby to support him at this very difficult time.

It is with sadness that we report the unexpected passing to higher service of our friend and fellow Lion Tony Moxey overnight on the 28th January 2022. A long term friend and work colleague to some of our senior membership, Tony was welcomed to the club in April 2017 and immediately got involved in Lions service and events.

He will be remembered by all for his jolly smile, great sense of humour and willingness to join in, and his support for other community services such as the local Hospital Link scheme demonstrates his commitment to improving Westbury for all. He always engaged with new members and was universally loved by everyone.

The club was especially proud to welcome his wife Barbara to the fold in March 2020, and the pair of them together brought warmth and laughter to every meeting.

Tony was laid to rest on Friday 25th February, surrounded by family and friends paying their respects. Our thoughts remain with Barbara and the family at this sad time.

Lion Eric Nixon passed to higher service on 4th Jan 2022, aged 93.
Eric was introduced to Fareham Lions back in 1981, following a conversation with a neighbour. He helped to provide a Fareham Lions presence at many events, such as Stubbington Carnival, Fareham Fireworks and other fetes or stalls, just so people within Fareham could be supported by Lions.
In 1986 Flight Lieutenant Eric Nixon retired from active service from the RAF after joining up at the age of 16 as an apprentice in 1944, an impressive 42 years of service.
He served many positions within the club including Treasurer and President but was not content to sit still and served as an officer within District 105D and MD between 1997 and 2012 as either Almoner, Community Service Chair or as Speech, Hearing & Medic Alert Officer.
One of the projects Eric worked on as MD officer was to resolve the issue of recycling and repairing of hearing aids. He liaised with HM Prisons where prisoners learned the skills to repair the hearing aids and put them back to use. Eric even visited the prison to see the work being done. The only problem was they let Eric out!
In 2005 Eric was presented with the Melvyn Jones Fellowship and also received an International Medal from the International President in that year, Jimmy Ross.
Eric was one for his stories, especially about his bomb disposal years in the RAF. A story shared with me was that Eric was driving Pat, his wife, Patrick Hamblin and Jo Hamblin to a Lions event. He was, to say the least, a fast driver, and they put this down to his service career when he was driving fast to get to an unexploded bomb! The thrill of fast driving never left him!
When Pat became District Governor in 2007, Eric provided a tremendous amount of support, as well as his chauffeuring skills.
Around 2009/10 Eric was diagnosed with early stages of dementia and continued his service informing clubs, schools and organisations about what it is like to live with dementia along with PDG Pat. This brought involvement with Kitbags and Berets, a group for ex service personnel living with dementia.
Eric was in Cosham Lions briefly and returned to Fareham Lions in 2017 bringing with him that same sense of fun, laughter, and stories.
In 2018, not only did Eric celebrate his 90th birthday but he was also a Citizen of Honour for Fareham Borough Council for his service to the community.
Fareham held its Senior Citizens Afternoon Tea Party (delayed) in October 2021 and on this occasion, we asked the Mayor of Fareham, Cllr Pam Bryant, to present Eric with his chevron for 40 years’ service as a Lion.
“As Lions, we hold ourselves to the absolute highest standards in everything we do. Our members and clubs are dedicated to serving others, and it shows. We champion kindness in our communities and actively work to improve the lives of all people.”
This was Eric - a Lion through industrious application; quality of service; true friendship.
Lions stands for Liberty, Intelligence, Our Nations Safety
But we will remember him for his Legacy, Inspiration, Occasional Numerous Stories, 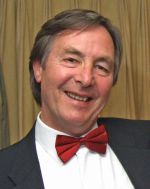 Yateley & District Lions Club are very sad to announce that Lion Neil Bray unexpectedly passed into higher service on November 16th 2021.
Neil joined Yateley & District Lions Club in 1984 and was president four times, 1997/8, 2006/7, 2012/13 & 2017/18. He regularly attended zone meetings and enjoyed District conventions through the years.
He was social chairman for many years organising a number of events including our charter anniversaries. Another office he enjoyed was being our Tail Twister, a task he took over in 2021.
He was a keen golfer and enjoyed numerous cruises visiting many countries. He had a great sense of humour and was a good storyteller. He was very knowledgeable on popular music in particular Buddy Holly and American Country Music.
He is survived by his wife Brefni, daughter Louisa, son Mark and two grandchildren, Marley and Mace.

The cremation service will be held at Easthampstead Park Cemetary & Crematorium (South Road, Nine Mile Ride, Bracknell, RG40 3DN) on Monday 6th December at 11:30am.
There will then be a funeral reception at Hampshire Lakes Bistro (Oakleigh Square, Hammond Way, Yateley, GU46 7UT) starting at 2:00pm.
The family have requested that there are no flowers but donations to The Multiple Sclerosis Society or Yateley & District Lions Club would be welcomed, both these charities were close to Neil’s heart. I believe that you will be able to donate through the funeral directors website:
www.fordmears.uk/funeral-directors/ford-mears-partners-yateley#donations
Brefni and family would love to see you, but to help manage arrangements could you please let me know if you are planning to come along to Hampshire Lakes for the reception.

I have the very sad duty to inform you that Lion Ian Forster passed away yesterday evening. At this point I don’t have any further details but will pass those along once I have received them. Ian was our longest serving member, having joined in 1974, and was a Melvin Jones Fellow.

Ian’s funeral has been arranged for 11:00am on Wednesday 20 October 2021 at Holy Trinity Church, 16 Church Street, Henley-on-Thames RG9 1SE. There will be a gathering afterwards at Badgemore Park Golf Club, Henley-on-Thames RG9 4NR. A private family service will then be held later that day at the crematorium in Reading.

It is with much sadness that I have to report the passing to higher service of Lion Michael Downer known as Chuff due to his voluntary work at the IOW Steam Railway.

Chuff had been a member of the Cowes Club Branch for five years, he was an active and willing member, volunteering to help in whatever way he could.

Following a series of Strokes he had been battling poor health for the past two years, and was in the Elms Nursing Home at Bembridge, he will be greatly missed by all who knew him.

It is with great sadness that the Lions Club of Poole report the passing to higher service of Lion Chris Poulton. Chris had been a member of the club for over 30 years. He was awarded a Melvin Jones Fellowship in recognition of his long and devoted service to the club and the community. He always had a smile and a kind word for everyone. He encouraged all who knew him, and his advice could always be relied upon. He was the perfect Lion Welfare Officer, a job which he did for many years, ready with a sympathetic ear, helpful words and practical assistance. He will be sadly missed and fondly remembered by his family, friends and fellow Lions.

Address for cards or messages

Blandford & District Lions Club are sad to announce the Passing to Higher Service of their President for 2020 - 2021 Gordon Cox on Friday 4th June after a short illness in hospital.

Lion Gordon was 85 years young and a late arrival to Lions, joining during March 2019 but we will miss him. He is survived by his children, Adrian, Derinda and Nick, along with extended families

He served in the Royal Army Pay Corps for over 20 years rising to the rank of W.O.2. He saw service in Germany, Singapore, Africa and two tours of active service in Northern Ireland; not what he expected as a member of the pay corps.

He would tell me that his proudest moment was his visit to the Western front graveyards and the Menin Gate at Ypres alongside his eldest son Adrian standing side by side for the last post to be played.

He was also a lawn green bowler, playing for the local club for over 25 years, plus over 200 matches for Dorset Bowls, for whom he was President on 2 occasions and was made an honorary life member for his service to Dorset Bowls.