You are here: projects » youth » youngambassador

Supported by the Lions Club of Jersey

Congratulations to Chloe De Gouveia on becoming our Young Ambassador for 2022. The District Finals were held on a Zoom Meeting in January. The Judges were unanimous in their decision to recommend Chloe to go forward to the Multiple District Finals to be held in February. 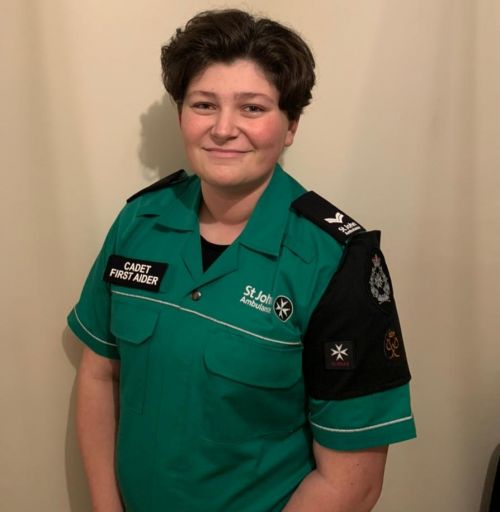 Here in her own words, Chloe tells us just a little about herself.

Currently, I am taking Biology, Chemistry and Psychology A-Levels in hopes of one day going into medicine which has been a passion of mine since I was a child. I have always been in love with the idea of having such a positive impact on the community and enjoy the adrenaline rush of this type of work which is why I started St John Ambulance at such a young age.

I am a part of the Combined Victoria College and Jersey College for Girls Cadet Form where I am a Cadet Corporal and most recently aided as a Recruit NCO training our new intake of recruits in skills such as map reading and radio communications.

I enjoy listening to and playing music and used to take guitar lessons and play in a band during the summer but had to give it up to focus on my A-Levels.

As a member of St John Ambulance, I have been involved in several public duties providing first aid care to the public in events such as the Barclay’s Jersey Boat Show, amounting to over 50 hours of service. In addition to this, as a Corporal in the cadet force, I aid in teaching other cadets first aid every week, helping them work towards their own Grand Prior Award, most recently helping them with their Casualty Simulation Course.

I always aim to give my time to my school in hopes of improving the strong community we have at college. Most recently, I was involved in helping with a joint Jersey College for Girls and Victoria College Jersey PSHE lesson in aims to strengthen the ties between both colleges, and additionally starting a new culture club to celebrate the diversity in our college.

The aim of the scheme, which operates throughout Europe, is to recognise, encourage and support young people who are actively involved in the welfare of the community, supporting the best of our Lions’ ideals. In previous years, candidates have been involved in helping young and older people, disabled, able-bodied and disadvantaged and have organised projects in conservation, crime prevention, promoting healthier lifestyles, hospital radio and other initiatives.